What is Carpal Tunnel Syndrome? 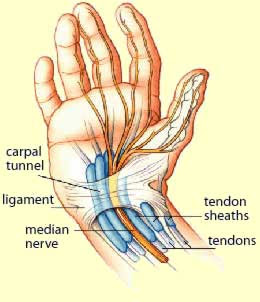 The carpal tunnel is the area under a ligament (a tough, elastic band of tissue that connects bones and organs in place) in front of the wrist. The median nerve, which passes through the carpal tunnel, supplies the thumb side of the hand. Repetitive movements of the hand and wrist can cause inflammation of structures (such as tendons and their coverings) that surround the median nerve. The inflammation may compress this nerve, producing numbness, tingling, and pain in the first three fingers and the thumb side of the hand-a condition known as carpal tunnel syndrome.

Carpal tunnel syndrome can vary from just a small amount of pressure to extreme pressure, and in the late stages of carpal tunnel syndrome, surgery may be necessary to release a short ligament at the wrist level. Earlier on, the best treatment will involve using a splint which keeps your wrist completely flat and is worn at night. This will decrease the excessive pressure that can develop at night when the wrist naturally goes into a bent position. Make sure that the splint you wear at night keeps your wrist completely flat.