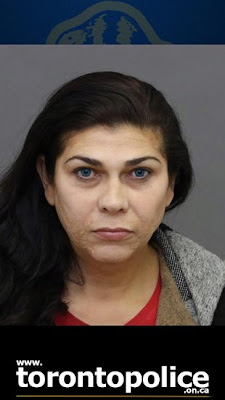 With all the plastic surgery nightmare stories circulating around the web, you’d think the dangers would be self-evident by now, and people would be cautious as to who is performing their surgery.

But the recent arrest of an Ontario woman reveals that many people are still risking their lives by submitting to surgical procedures at the hands of unqualified practitioners.

Police say the woman felt ill with a high fever immediately afterward, and three days later she’d deteriorated to the point where she required hospitalization.

“She was treated for several days with antibiotics but the woman’s condition continued to deteriorate and she received surgery,” Toronto Police Det. Louise Farrugia tells reporters, adding that the surgery was necessary to remove the substance from her rear.

Although the woman is expected to make improvement over time, Farrugia says that she can “barely walk,” is still hooked up to IV and has trouble sitting down.

Reid — who shilled her injectable wares on the website pmmainjection.com — advertised “lip, muscle and buttock injections” and would meet her clients at their private homes or hotel rooms.

As the National Post notes, PMMA stands for polymethyl methacrylate, and it’s an expensive thermoplastic once commonly used as bone cement in cosmetic surgery procedures.

By the 90s, PMMA got mixed with bovine collagen to create a long-term injectable that helped kick off the Botox craze.

The problem, as Julie Khanna of The Institute of Cosmetic & Laser Surgery tells the Post, is that the product was easy for unlicensed people to get their hands on.

In another case south of the border, police in Mississippi charged Morris “Tracey Lynn” Garner this September with depraved-heart murder after he allegedly pumped a client’s backside full of so much silicone product that she eventually died. Blood clots were found as far north as her lungs.

British police also had their hands full last March after Padge-Victoria Windslowe — a hip-hop singer who also went by the name “Black Madam” — was connected with the death of a 20-year-old British student whose backside was allegedly injected with implants by Windslowe.

And unfortunately the stories are too numerous to list in their entirety here.

It’s imperative to treat cosmetic surgery like any other surgery. That means finding an accredited doctor and investing the money required for a proper procedure.

Because as painful as physical complications may be for the individual, the agony of losing a loved one to botched cosmetic surgery lasts far longer for family and friends.

by Jordana Divon via Shine On