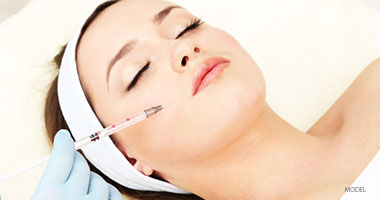 The lines that appear between your brows (glabellar lines) actually result from muscle movement and the passage of time. If you become angry or annoyed, you knit your brows together. Underneath your skin, your facial muscles contract, cause a pleating of the overlying skin, and then, as anyone can see, you're frowning.

After years of crinkling and wrinkling, those glabellar lines start to linger longer and can become more pronounced. For women, whose faces tend to be more animated than men’s, and whose skin is typically more delicate, these lines may appear exaggerated and more permanent.

The cosmetic form of botulinum toxin, often referred to by its product name Dysport®, is a popular non-surgical injection that temporarily reduces or eliminates frown lines, forehead creases, and crows feet near the eyes. The toxin blocks the nerve impulses, temporarily paralyzing the muscles that cause wrinkles while giving the skin a smoother, more refreshed appearance. Studies have also suggested that Dysport® is effective in relieving migraine headaches, excessive sweating and muscle spasms in the neck and eyes.

Dysport® injection is the number one cosmetic procedure in the United States, with 3.8 million treatments performed in 2005. This was introduced in the late 1980s by ophthalmologists for treating optic muscle disorders. It was approved by the FDA for cosmetic use in 2002, helping millions of patients get rid of nagging facial lines and wrinkles.

Today, the variety of Dysport® uses includes ocular muscle spasms, problems with eye coordination, severe armpit perspiration, and as an anti-wrinkle treatment for crow’s feet, frown lines, and to eliminate furrows in the forehead.

Dysport® injection is performed in the office, usually without anesthesia. However, some patients opt for a prescription for a numbing cream that can be applied to the treatment area before their appointment. Generally, patients return home shortly after the treatment is complete. You can expect to be in and out of the physician’s office without downtime, and can resume normal activities immediately.

You may see a marked improvement in the moderate to severe frown lines within days. Improvement may continue for as long as a month, and could last up to four months.

Located just off the intersection of Highway 63 and Grindstone Parkway. Get directions from your house to our office.

This clinic is located at the CMMP Surgical Center. Get directions from your house to our office.